RUSH: A lot of you have been listening a long time, 30 years. There's a bugaboo of mine that I have been mentioning for almost all of those 30 years, and it's a group that I dubbed "The Offended," capital T, capital O, The Offended, and they have bothered me from the very beginning. You could have 99 people in a room and one of them would be offended by what the 99 are doing, and the 99 would have to stop doing it.

They're a bunch of censors. They're a bunch of busybodies who figured out that to get what they want, just act offended. Rather than say that they're a politically organized group, just offended. They're not even political in their view. They're just living their lives, and they are offended by various things that happen. And it just bugs me that everybody kowtow to them.

What's special about being offended? Grow up. In terms of being offended, I don't even want to give people the power to offend me. Well, it's been a pet peeve of mine, and now it's an officially established political organization, The Offended. They are the people that implement and enforce political correctness and censorship.

Well, it turns out that in the show prep three days ago I found a story: "Study Reveals That Easily Offended People Are Less Productive, Bad Employees." So somebody actually did a study on it. It's at a website called Summit News. I never heard of Summit News, but I'll take it since it says something here I agree with. 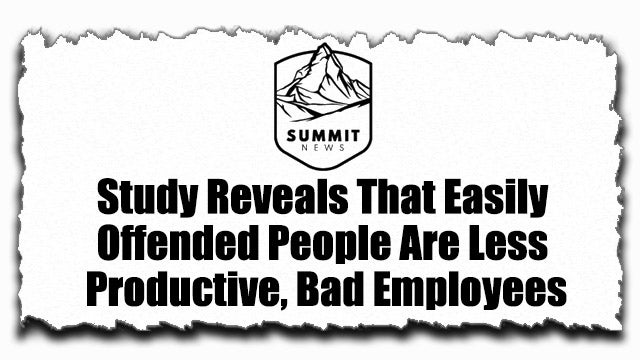 "A study conducted by a Professor at San Diego State University has discovered that people who are easily offended make terrible employees because they never get anything done. The study, conducted by Dr. Jeremy Berneth, involved asking almost 400 employees, aged 25.9 on average, across seven US colleges about different events that have recently gotten 'substantial media attention.'

"The study notes that the events consisted of '17 items developed to assess the proclivity to be offended, eight moral outrage items, 11 microagression items and nine political correctness items.' It noted that some people have a high 'proclivity to be offended' (PTBO), which the study describes as 'a state-like tendency to be sensitive to customarily innocuous societal events and traditions,' for example 'playing of the United States' National Anthem.'"

The easily offended are offended by that, so they take a knee to supposedly call attention to police brutality. "Basically, they're easily triggered by anything. Dr Berneth found that high PTBOs are less productive, because they are constantly worrying about how the organisations they work for are 'less fair,' than everywhere else, and they 'consume a lot of time complaining about trivial matters.'"

They're obsessed with what everybody else thinks of them. I wish it had gone further 'cause I tell you, I think this group known as The Offended are actually a very active, purposeful political organization that are camouflaging themselves to make them look like just mentally disturbed. But the bottom line is, why does everybody kowtow to anybody who's offended without even thinking, "Well, that's stupid to be offended by that. If that offends you then ignore it."

But the left, anybody comes along and claims that something offends them, they are immediately given full attention, credibility, and the people who offend them are then challenged to stop whatever they're doing. And I think it is one of the serious ways in which our culture has been under assault. And what really hit me about it when it first started is something that still bothers me today. There is no pushback against it.

And so the town came along and made the guy stop smoking, when there's no way this woman could have possibly smelled anybody's cigarette smoke from a football field away in a closed up apartment. And instead of somebody making that point, they just went to the person smoking the cigarette, "You are disturbing a fellow tenant. You must stop." This was before there were any bans. Before any public bans on smoking.

This is how they got this stuff going. And I maintain there was no way anybody -- a football field's 300 feet, hundred yards -- no way two people in two closed-up apartments could smell anything going on in any of those two apartments. But because one person was offended, why, the other person had to stop what they were doing. And there was no pushback. The person who was smoking, "Okay. Okay. I'm sorry. I'm sorry. Please don't punish me, please don't punish me."